The latest version has some performance improvements and contains DOM events.

AngleSharp is still far away from being finished, however, with every release more and more features are published. The 0.6 versions mark quite a dramatic change. The whole API has been polished and the core implementations for appending, removing, etc. elements have been changed. They all use the WHATWG algorithms. Additionally the parser is now avoiding these implementations, since the parser knows exactly what to do (one might guess).

The parser also uses a different model that closes (finalizes) elements. The performance gain is not dramatic, but it is certainly nice to have. The following chart demonstrates the current performance against other C# solutions for parsing HTML content. 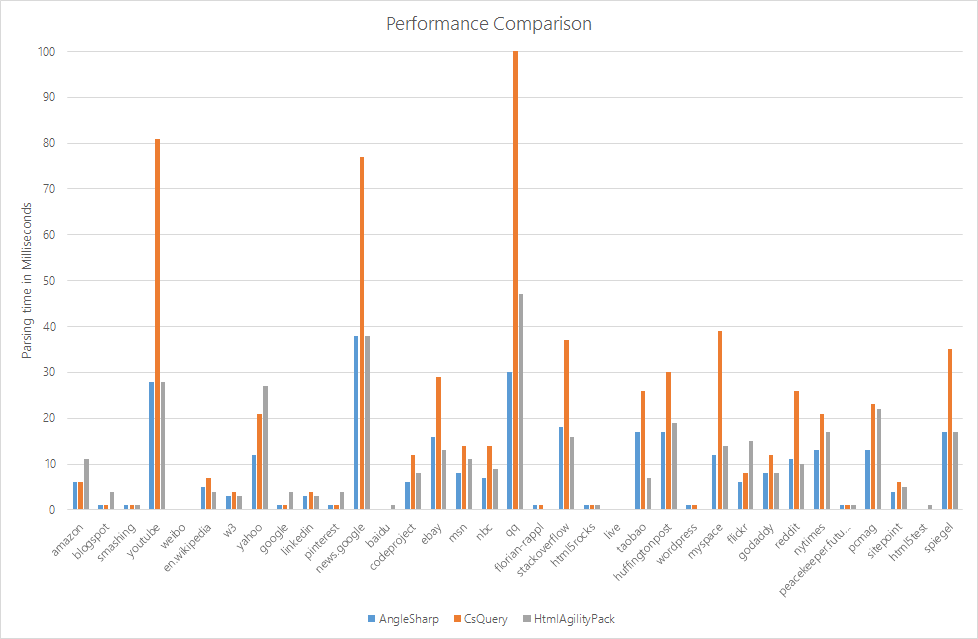 While HtmlAgilityPack should be avoided (no update since quite a while, lacking performance, no CSS selectors, not HTML5 conform), CsQuery is a nice project. The API is really fun and it practically contains everything for parsing plain HTML. However, it does not have a CSS parser. It also does not contain any extensions for building more advanced applications on top of it.

In the next version AngleSharp will introduce a new CSS API. Of course the existing API will not change so much. The way one interacts in JavaScript with the CSS will still be possible. However, the C# (only) part of the API will see quite some changes. This will allow more exact and deterministic changes and evaluations in the CSSOM.

Also the core of the library will shift a bit. The whole DocumentBuilder approach is historic and will probably change to using BrowsingContext. One will then either talk to a very minimalistic implementation, or come up with some custom implementation of IBrowsingContext. In the end, this will enable a lightweight version for only parsing basic HTML (and no configuration, i.e. no CSS, external requests, etc.) without doing anything.

This will also enable complex webapplications and extended scenarios. One such example is the current approach outlined in AngleSharp.Scripting. Here Jint is used as a JavaScript interpreter. This is easily possible - and the approach will be extended from this point on.

Version v0.7.0 will be released in September (or start of October). It will be another major milestone before reaching v1.

It turns out that CsQuery can be faster without the internal indexing being active. While this could be considered a crucial feature of the library, it is just fair to deactivate it for testing out the parser alone. In the end I also deactivated CSS parsing in AngleSharp (well, I can easily justify that).

The creator of CsQuery, James Treworgy, wrote me an email with some interesting information, including a nice performance comparison he conducted. AngleSharp still shows acceptable performance, but the following pieces need additional input:

Going forward to v0.7 I will not try to get any more performance updates done. Performance will be considered again after v0.7 has been published. As long as the performance is acceptable, I will consider implementing standardized features before going for 1% increased performance.

The priority towards v1 is as follows:

I will post some updated / different performance charts soon.