Some weeks ago my Samsung TV broke. The disappointing part here is not (only) the sustainability of the device, but (mainly) the lacking support of Samsung.

It was a beautiful Wednesday evening. Champions league (soccer) was running in free TV (for the first time in years!) and my favorite team was playing quite nice. Then I (and a friend of mine who was watching the game as well) realized that the picture is starting to look really funny. Once I mentioned it my friend also realized that the screen has become quite blurry with all some (light) colors being solarized. I thought: Wait, the TV is only 2 years and 3 months old... How can that be?!

This is how the image should approximately look like (taken from a low quality camera):

This is how the image does look like (camera quality is still lacking):

Since I was watching on a digital channel I had not doubt that this is not a cable issue. Checking it resulted in a positive feedback: It was indeed the television, which had problems. During the end of the game the problem became even more severe. When the referee gave a penalty in the last minute we had a hard time figuring out what happened. After all, all we could see have been small yellow and blue dots in a sea of green.

I immediately wrote a mail to Samsung explaining the problem and attaching screenshots. I did this over the official support channel. I desperately waited for a response, in order to get a clue what could be defective. Nothing! Then I tried the same again and also tried to reach Samsung by calling. Again: Nothing! No response or any try to help me out there. I never requested a refund, money or a new device. Everything I asked for was some help: is this a known problem or is this unknown? If it is known: What is the problem and how to order some spare parts? If it is unknown: What could be the problem? Any suggestions?

The TV once it has been opened: 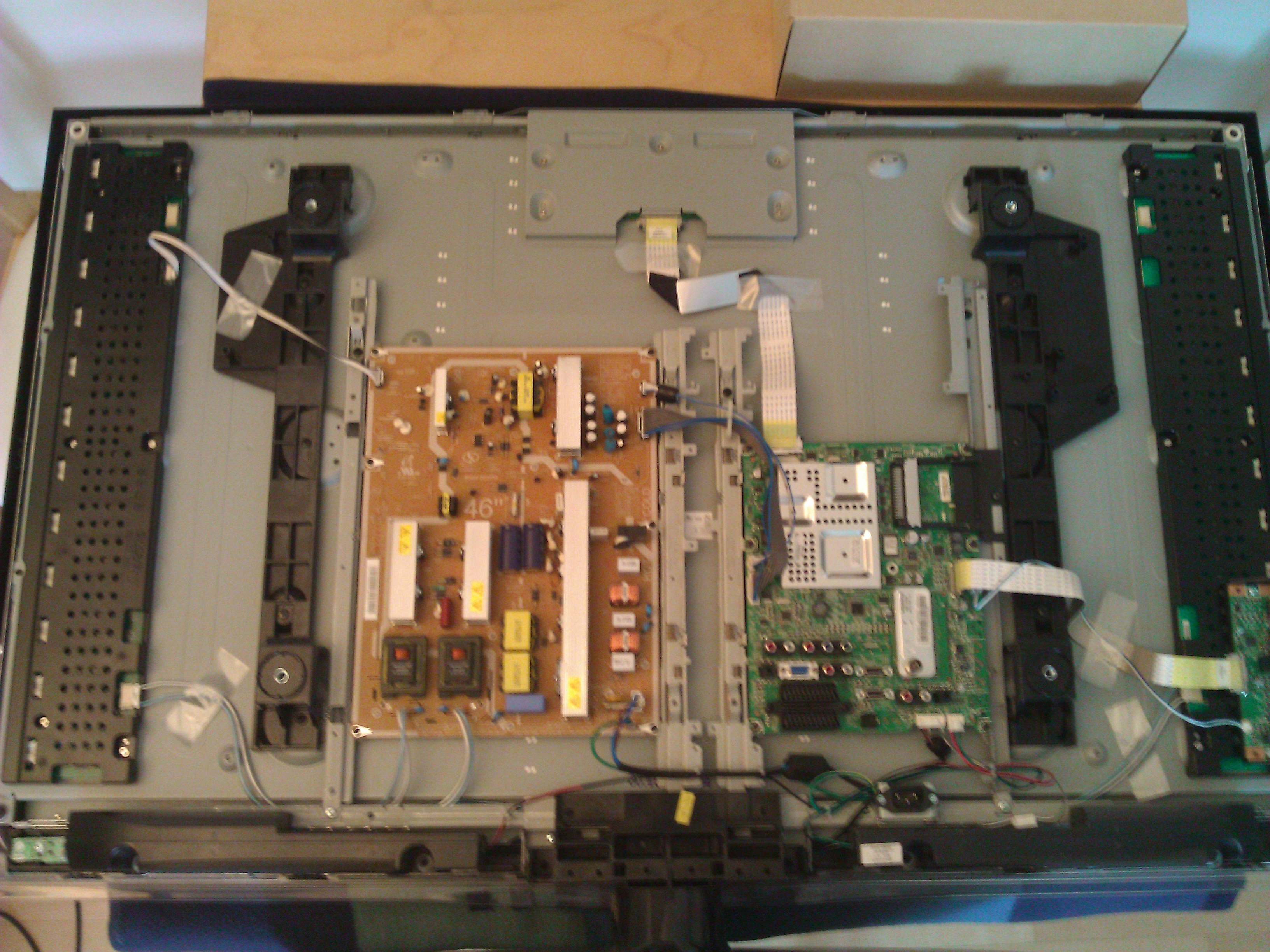 As some weeks passed I thought I'll have to figure this out on my own. So I started opening the TV, assembling item numbers and ordering new parts. I started with the part that is assumed to fail first: The signal board (shown below). 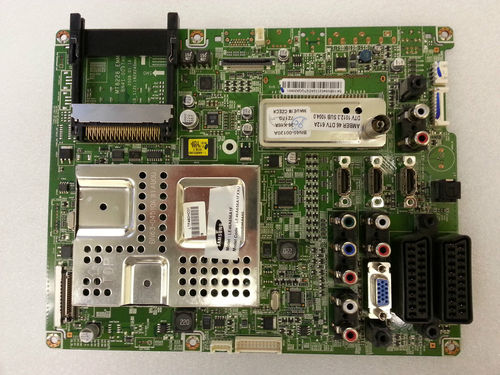 Ordering it was only possible over eBay (see picture below). I actually managed to find a seller in Berlin and got it in some days. The downside was, that even though it has been the same board, Samsung did some modifications on mine. Therefore some slots moved to different positions. For example with the board I bought it was not possible to mount an USB device, since the USB port was no inside the TV. However, that did not matter at all. Trying the new board resulted in disappointment: The TV was still not working with some colors being much too light, others being much too dark. Luckily I could return the spare part without any problem. 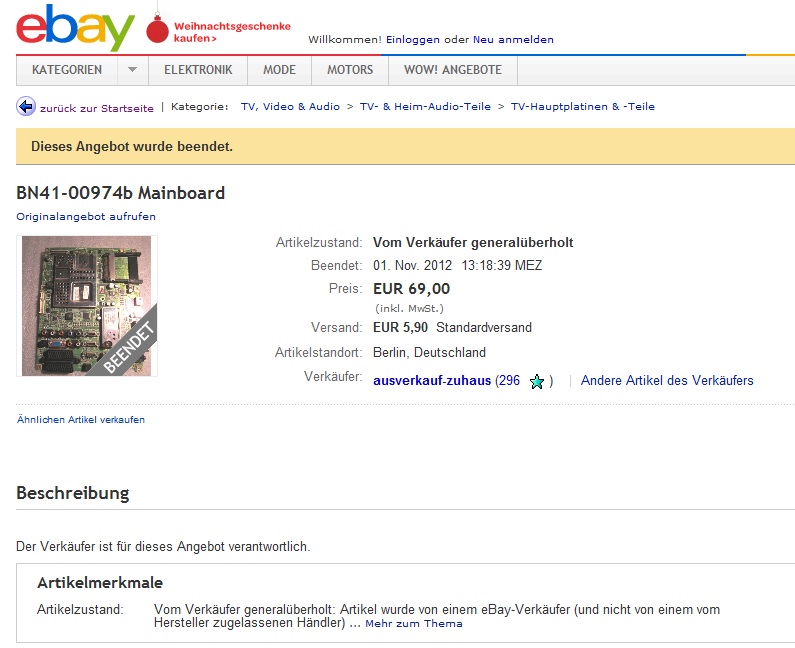 The next thing was the power board. Finding a seller here was a lot more difficult. But again, I've been successful. This time I had to order from the United Kingdom (see picture below). Replacing the board did not help as well. In the end that was just an indication that the board they've send is still alright (as is mine), since they part they've been sending to me had a broken edge. Since it looked to me that no circuits have been crossing this edge, I still tried it. Sending it back and getting the refund did work, which was again quite lucky (this does unfortunately not seem to be the standard!).

Since I was running out of options on this I consulted a guy who repairs TVs professionally. I told him everything I had to done up to this point and that I believe, that it is probably the panel, which indicates death to the TV. I asked him if he knows anything that I or he could still try. He gave me an advice concerning the bonding of the panel. The repair costs would be like 150 EUR, if my test would be positive. Needless to say: it was negative.

I usually would have written a big success story on how to repair a Samsung TV, which is having those symptoms, however, now I am writing a story about why I replaced my TV (and future screens, i.e. computer screens, TVs, ...) with a different brand than Samsung. I bought Samsung devices for years, since I believed that they had an unbelievable quality-price ratio. Now I am seeing that even though the price is decent, the quality is only polished on the surface, with the support lacking big times.

My new TV is a LG, which has been on the an even lower price level as corresponding Samsung models. Right now I am very happy with this good looking, user-friendly TV. Let's see if this model lives long than 2 years and 3 months...

Yet Another Math Parser
Tags
trustcontactemailbugsamsungtvbrokensupportcustomerrelationshippanelboardebayrepaircolorbonding
Advertisement
Get in touch